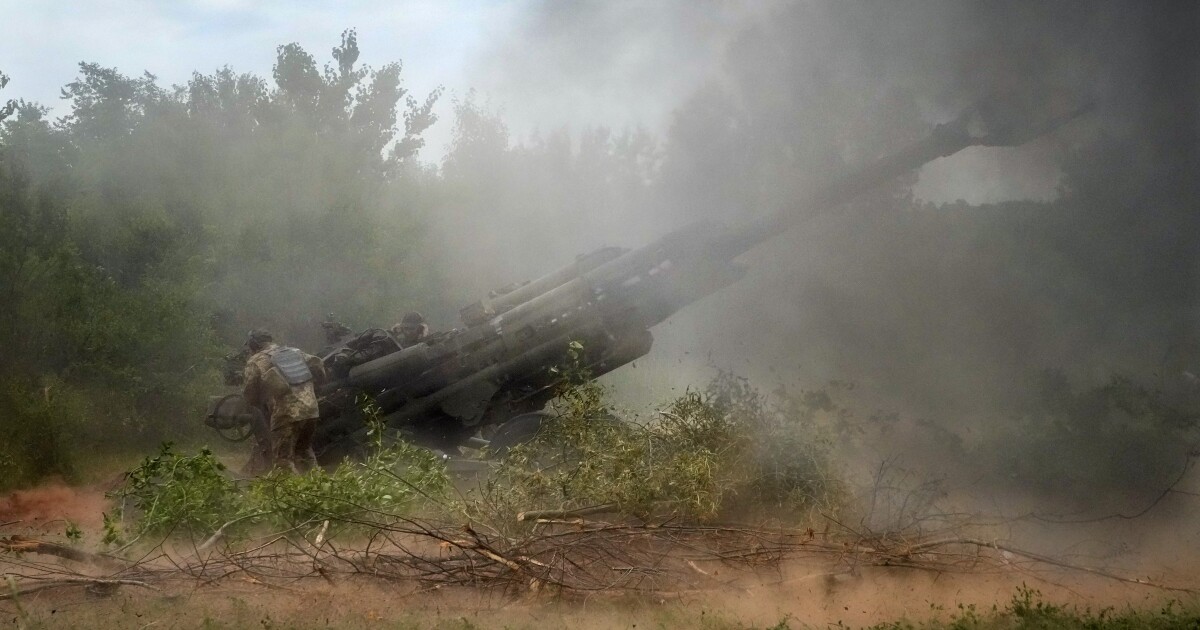 Tensions rose Tuesday over Russia’s threats against Lithuania, a North Atlantic Treaty Organization member, over the small Baltic state’s moves to enforce Western sanctions against Moscow. At the same time, Ukraine’s president said the Kremlin was “very nervous” over gathering momentum for his country’s bid to eventually join the European Union.

The increasing diplomatic friction comes against a backdrop of intense fighting for a pair of strategic cities in eastern Ukraine, a bloody war of attrition in which Russian forces are trying to wear down outgunned Ukrainian troops with unrelenting artillery barrages.

Western countries including the United States are sending Ukraine more heavy weaponry to try to counter Moscow’s military superiority in the battle for the country’s industrial heartland, but Ukraine has repeatedly appealed for additional armaments.

In his latest overnight address to compatriots, Ukrainian President Volodymyr Zelensky denounced Russian forces’ “brutal offensive” in the region, known as the Donbas. He acknowledged difficult fighting as Moscow presses its advance on the twin cities of Severodonetsk and Lysychansk, which are separated by a river.

Ukrainian defenders of Severodonetsk are concentrated in a besieged industrial complex, where civilians are sheltering as well under heavy Russian shellfire.

Around Lysychansk, there were signs that the Ukrainian defenses were crumbling. On Tuesday, a Ukrainian commander, who asked his name not be used so he could speak freely, described a Russian advance in Toshkivka, a village on the city’s southern edge. He said his battalion was forced to withdraw after losing too many fighters.

“Lysychansk is almost surrounded,” the commander said. “There aren’t enough forces or weapons. For every shot of ours, the Russians respond with twenty.”

Reverberations from Russia’s nearly 4-month-old invasion of Ukraine, meanwhile, continued to be felt worldwide, in the form of looming food shortages caused by Ukraine’s inability to ship grain from war-blockaded ports on the Black Sea, and a fuel crunch in Europe triggered by Moscow’s reduction of natural-gas supplies. The Kremlin blames both crises on the West.

NATO has refrained from direct confrontation with Russia while supporting Ukraine, but a potential flashpoint has emerged in the Russian enclave of Kaliningrad, which borders alliance member Lithuania.

Russia has threatened unspecified retaliation over Lithuania’s refusal to allow land transit of some goods to the tiny patch of Russian territory. The government in Vilnius says the partial blockages are in line with European Union sanctions.

The Russian Foreign Ministry on Tuesday summoned the European Union’s envoy to Russia to press the issue, according to news reports. The ministry had already summoned Lithuania’s top diplomat to demand the reversal of what it called the “openly hostile” moves.

Zelensky said Russia’s offensive against Severodonetsk and other eastern areas was intensifying in part because of Moscow’s fears that Ukraine is advancing in its aspirations to join the EU. Although the process will likely take years, EU meetings later this week are expected to yield formal support for creating a path for Ukrainian membership in the bloc.

“Russia is very nervous about our activity,” Zelensky said.

In his overnight address, the president also extended thanks to Hollywood actor-director Ben Stiller, with whom he met on Monday.

Stiller, who has most recently garnered critical acclaim for the streaming TV series “Severance,” is a goodwill ambassador for the U.N. refugee agency. As part of a visit to the region, he met with refugees and officials, including U.S. Ambassador Bridget Brink, and visited a Kyiv suburb devastated during a Russian occupation early in the war.

“I am grateful to Ben for his constant attention to the needs of Ukrainians,” said Zelensky, who shares with Stiller a background as a comic actor. Stiller in turn described the Ukrainian leader as his “hero.”

Bulos reported from Dnipro and King from Washington.