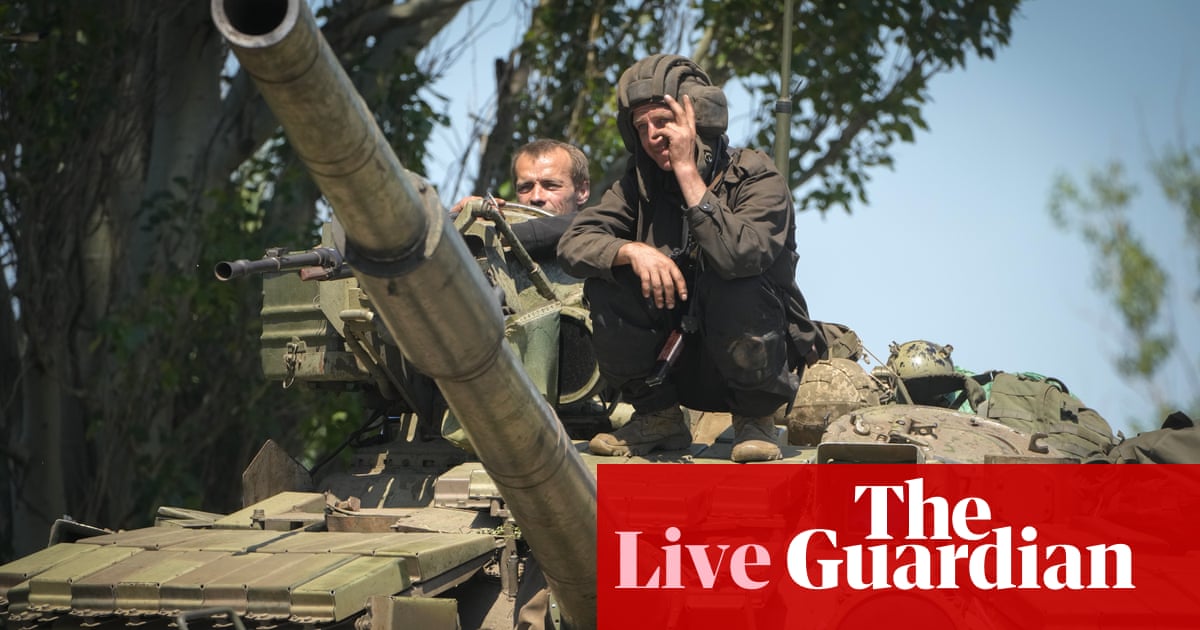 Reuters reports Georgian prime minister Irakli Garibashvili has said at an economic conference in Qatar that his country is committed to joining Nato, but must solve its territorial problems with Russia first.

Georgia is sandwiched between Russia in the north, with Turkey, Armenia and Azerbaijan to its south. The breakaway regions of Abkhazia and South Ossetia are internationally recognised as part of Georgia’s territory, although a handful of states, including Russia, officially recognise them.

Three people were killed and seven people were injured by Russian shelling on the Kharkiv region in the last 24 hours, according to a post on Telegram by the governor of the area, Oleh Synyehubov.

He claimed that a fire at a gas processing plant in Izium is being fought after the strikes, and that an educational building in the Kyiv district of Kharkiv was 40% destroyed after the attacks.

He said that fighting continues in the Izium area, but that Ukrainian forces “repel enemy attacks and hold their positions securely.”

The claims have not been independently verified.

Serhai Haidai, Ukraine’s governor of Luhansk, has confirmed that the regular free evacuation train from Pokrovsk in eastern Ukraine will run to Lviv via Dnipro this afternoon.

The Nobel Peace Prize that Russian journalist Dmitry Muratov was auctioning off to raise money for Ukrainian child refugees has sold for $103.5m (£84.5m), shattering the record for a Nobel.

Muratov, who was awarded the gold medal in October 2021, helped found the independent Russian newspaper Novaya Gazeta and was the publication’s editor-in-chief when it shut down in March amid the Kremlin’s clampdown on journalists and public dissent in the wake of Russia’s invasion of Ukraine.

It was Muratov’s idea to auction off his prize, having already announced he was donating the accompanying $500,000 cash award to charity. The idea of the donation, he said, “is to give the children refugees a chance for a future”.

Muratov has said the proceeds will go directly to Unicef in its efforts to help children displaced by the war in Ukraine. Melted down, the 175 grams of 23-karat gold contained in Muratov’s medal would be worth about $10,000.

The target of the attack on 17 June was almost certainly the Russian naval tug Spasatel Vasily Bekh, which was delivering weapons and personnel to Snake Island in the north-western Black Sea, according to the latest UK ministry of defence report.

The destruction of the Russian vessel on a resupply mission “demonstrates the difficulty Russia faces when attempting to support their forces occupying Snake Island” the report adds.

This is the latest in a series of Russian vessels, including the cruiser Moskva, to be damaged or destroyed by Ukraine during the conflict.

This has undermined the viability of Russia’s original operational design for the invasion, which involved holding the Odesa region at risk from the sea.”

Denmark’s energy agency declared a first level “early warning” alert over worries of its gas supply, due to uncertainty on energy imports from Russia due to the war in Ukraine.

The European Union has established a system to allow member states to flag up impending energy supply difficulties using three ascending levels of alerts – beginning with “early warning”, followed by “alert”, then “emergency”.

The system allows for mutual assistance from other EU countries, but could also mean a start to rationing supplies.

“This is a serious situation we are facing and it has been exacerbated by the reduction in supplies,” Hansen said in a statement, as reported by Reuters.

Currently Denmark’s gas stocks are about 75% full, “and gas has been added in recent days”, the agency added.

The declaration comes after Danish energy company Orsted announced at the end of May that delivery of Russian gas to the Scandinavian country would be suspended from June 1, after Orsted refused to settle the payment in rubles.

Russia is one of the main sources of natural gas imports in Denmark, according to the Danish Energy Agency.

The Netherlands also announced Monday it will lift restrictions on coal-fired power generation, a day after Germany and Austria took similar steps to alleviate their reliance on Russian gas supplies.

The Russian foreign ministry is set to summon European Union ambassador to Moscow, Markus Ederer, later today over Lithuania’s ban of the transit of goods under EU sanctions through Kaliningrad.

Vilnius banned the transit of goods under European Union sanctions through Lithuanian territory to and from the Russian exclave sandwiched between Lithuania and Poland, citing EU sanction rules.

This is, of course, a situation, that can be resolved by diplomatic means,

As far as I know, tomorrow Marcus Ederer, the European Union ambassador to Russia, will be summoned to the foreign ministry …. and he will be told of the appropriate conditions involved here.”

Russia has threatened to retaliate over Lithuania’s ban on the transit of some goods across its territory to the Russian Baltic Sea exclave of Kaliningrad.

The move by the government in Vilnius was described as “unprecedented” in Moscow, where the Russian foreign office said they reserved the right to respond to protect their national interest.

Putin’s spokesperson, Dmitry Peskov, further escalated tensions on Monday by threatening a response to what he said was an “illegal move”.

This decision is really unprecedented. It’s a violation of everything. We consider this illegal. The situation is more than serious … We need a serious in-depth analysis in order to work out our response.”

Wedged between Lithuania to its north and east, and Poland to its south, Kaliningrad is about 800 miles (1,300km) from Moscow and relies on much of its supplies coming in by rail.

If cargo transit between the Kaliningrad region and the rest of the Russian Federation via Lithuania is not fully restored in the near future, then Russia reserves the right to take actions to protect its national interests,” it said.

Kaliningrad is about 800 miles (1,300km) from Moscow and relies on much of its supplies coming in by rail.

Lithuania’s foreign minister, Gabrielius Landsbergis, said Moscow was spreading false information and that the state railway service was acting lawfully by merely implementing the EU’s sanctions regime prohibiting the supply of steel or goods made from iron ore to Russia.

Landsbergis said that under half of the goods usually supplied by transiting across Lithuania would be covered by the sanctions regime over time, with the ban on steel coming into force on 17 June.

“I think there was some false information, not for the first time, announced by the Russian authorities, but I’m glad that we have a chance to explain this,” he said. “At this point, about slightly less than half of goods that transit Lithuania are on the sanctions list, but that doesn’t mean that all of them are under sanctions right now.

“Because there are different wind-down periods, and some of it, for example oil, will be sanctioned just at the end of the year, starting from December, even though the authorities have announced it is sanctioned already, which is not true actually.”

Hello it’s Samantha Lock back with you as we continue to report all the latest news from Ukraine.

The Russian foreign ministry is set to summon European Union ambassador to Moscow, Markus Ederer, later today over Lithuania’s ban of the transit of goods under EU sanctions through Kaliningrad.

Here are all the other major developments as of 8am in Kyiv.