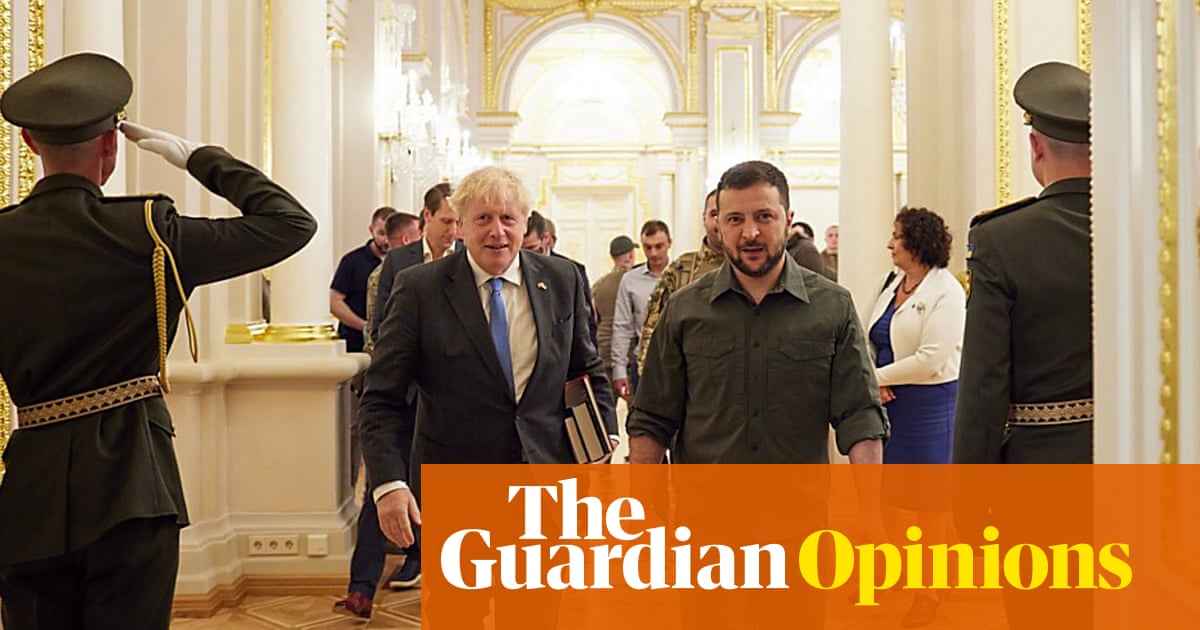 Whenever Boris Johnson is in the doghouse at home, there’s one place he can always expect a warm welcome. So it is perhaps no surprise he abandoned a planned speech to restless northern Tory MPs in favour of flying to Ukraine last week, for another firm handshake with its heroic wartime president. Yet, cynical as the timing of this particular photo opportunity looks, Johnson’s warning of the dangers of “Ukraine fatigue” setting in as the war grinds on was salutary and fair. What he has yet to do, however, is spell out exactly what being in it for the long haul – which could now mean years, according to Nato’s secretary general Jens Stoltenberg – actually involves.

The days when solidarity with Ukraine meant putting a blue and yellow flag on your social media profile and watching TikToks of farmers merrily stealing Russian tanks are over. Britain is not strictly speaking at war, but ours is now a wartime economy. This country has entered a new and unfamiliar form of conflict which does not risk the lives of British soldiers, but effectively puts our economic wellbeing on the frontline instead. Withstanding the economic storm now buffeting us, as war pushes the price of both oil and wheat ever higher, is the contribution most ordinary Britons didn’t quite realise we were going to be making to the war effort.

Life is already tough for millions thanks to the soaring fuel and food prices, which have driven up what would have been rocketing inflation anyway (caused globally by countries roaring back to life post-pandemic, and exacerbated in Britain by Brexit). But it’s going to get tougher when the weather gets cold enough to put the central heating on. This is something Vladimir Putin is undoubtedly factoring in to his calculations about how long European solidarity will hold before someone cracks and tries to push Ukraine towards a “bad peace”.

The new chief of the army’s call for British troops to get “fighting fit” for another war in Europe should correctly be read, meanwhile, not as a sign that anyone is about to deploy, but as a warning to the Treasury that planned cuts to the army would be a false economy. For Putin, this isn’t just a battle over territory in Ukraine but a means of probing for weakness within Nato, and none of Ukraine’s neighbours will be safe unless the alliance demonstrates its willingness to defend them if necessary. But it’s unclear how all this is going to be paid for, with Gordon Brown arguing that planned corporation and fuel tax rises may have to be ditched to avoid pushing inflation any higher, and plenty of other pressing domestic demands on the chancellor’s purse. Ukraine and levelling up may soon be competing, in other words, for more than just space in Johnson’s diary.

An autumn of strikes and painful public-sector pay negotiations meanwhile looms, as squeezed workers understandably push for pay rises. Lecturing people on the need for restraint, as the chief secretary to the Treasury Simon Clarke did yesterday, may work if this is a very temporary blip (especially if the message is clearly aimed at higher earners who can afford to be noble). But what if this new form of economic warfare means living with higher fuel and food costs for the longer term?

Vulnerable people will obviously have to be protected, as they were in last month’s emergency package of help with fuel bills. But we would also have to rethink everything from food security to public transport and how we heat our homes. That means not ditching net-zero policies as some Tory backbenchers want, but doubling down on them, for the sake of the planet but also of our own resilience in a world where the price of oil may not be falling any time soon. Hints that Downing Street is looking at emergency measures to boost home insulation this autumn, helping people use less gas, would be the kind of win-win idea we are going to need. But that’s the easy bit.

Rishi Sunak’s budget this autumn is inexorably becoming a wartime one, something the Treasury has understood. Listening to the chancellor fielding questions at a session on the cost of living in Bishop Auckland earlier this month, I was struck that he responded to a question about the cost of petrol by saying Britain had “taken a collective decision to stand up to Putin”; that we weren’t sacrificing our troops on Ukrainian soil as we may once have done but instead making collective sacrifices at home. But wartime sacrifice requires public consent, which this government has yet to secure explicitly.

Does it even have the moral authority to try? The last time Johnson asked the nation to do something painful for the greater good, he was standing at a lectern flanked by worried-looking doctors and telling everyone to stay at home. To put it mildly, given what we now know was happening in Downing Street while the rest of us were in lockdown, it’s hard to imagine another plea for noble sacrifice going down well.

But it’s not Ukraine’s fault that we have a moral vacuum for a leader. If Stoltenberg is right about the crisis grinding on for years, then it is something Johnson’s successor will probably be grappling with too. There is no painless form of war, no matter how cold or hot it runs, nor how far away it seems. Sooner or later, someone has to level with the public about the fact that freedom only ever comes at a price.