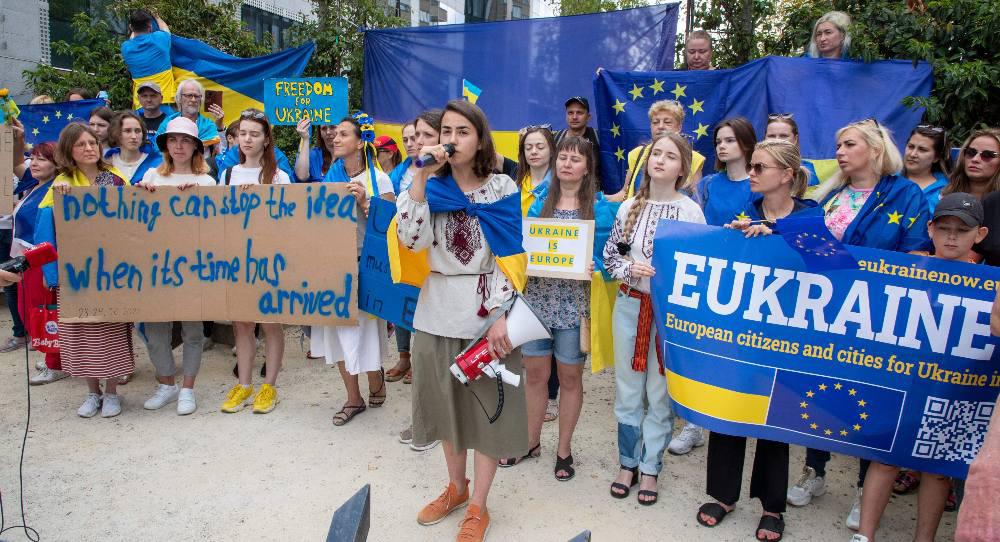 The decision the European Council is being asked to make on June 23-24, following the European Commission’s recommendation to grant Ukraine and Moldova EU candidate status, marks a historical moment for the EU.

Sasse is a nonresident senior fellow at Carnegie Europe. Her research focuses on Eastern Europe and the former Soviet Union, EU enlargement, and comparative democratization.

It is comparable to the EU’s decision on eastward enlargement in the early 1990s. Similar to the lengthy discussions surrounding the fundamental decision to open the path to membership for Central and Eastern European countries back then, the issue of a candidate status for Ukraine and Moldova has been far from a done deal.

Ahead of the European Council meeting, it now looks likely that all twenty-seven member states will in fact agree on the candidate status for Ukraine and Moldova. Previously, several member states, among them Denmark and the Netherlands, had openly voiced their doubts. Others waited for a long time before positioning themselves clearly, among them Germany.

And others agreed only after having considered alternatives to membership, such as France. President Emanuel Macron floated the idea of a “European political community,” which would have effectively been a new waiting room for countries aspiring to EU membership.

The trip to Kyiv by the German, French, Italian, and Romanian heads of state and government on June 16 forged a powerful pro-candidacy position. The leaders’ visit made it considerably more difficult for other member states to position themselves against the candidate status. Even now, however, it is still possible that wordy explanations will accompany the decision on the status for Ukraine and Moldova, reminding these countries’ governments and reassuring everyone within the EU that there will be no shortcuts past the union’s conditions even in times of war.

The frequently referred-to criteria for membership, however, are broad statements with plenty of room for interpretation on what exactly constitutes stable democratic institutions and a functioning market economy with the capacity to take on the EU acquis.

Importantly, these conditions, formulated in 1993, serve as benchmarks both at the outset of the process when the candidate status is decided upon and throughout the negotiating process, right up to the final decision on accession.

Ukraine’s postwar situation is currently unknown, but it will be different from the pre-war situation, also with regard to the oligarchic interests that had repeatedly stood in the way of anti-corruption reforms. Ukraine’s political landscape is in the process of being transformed, and parties and economic interests associated with blocking reforms may not be able to fully regroup.

Moreover, the mobilizing effect of this war could be channeled into a reform-led reconstruction. The EU would be expected to be a major player in this reconstruction effort anyway, so it might as well do this with a mandate and objective.

The European Council is likely to also formulate a conditional perspective for Georgia as a “potential candidate,” and it is possible that the union will clear the way for membership negotiations for long-time candidates Albania and North Macedonia.

A candidate status for Ukraine is much more than symbolic politics. It sends a strong political signal to the Ukrainian government and all its citizens, to the Russian government, and to the EU itself.

The message to Ukraine is one of support now and beyond the war. It is also a clear signal to Russian President Vladimir Putin’s hopes to crush Ukraine’s political and economic model which one day could become a risk for Russia. And inside the EU, it is a reminder of the ideas and values the bloc stands for, and why the EU often seems more attractive to those that are not (yet) in it.

With this European Council meeting, the need for internal EU reforms becomes even more tangible, especially with regard to the unanimity rule in matters of foreign and security policy.

The European Council meeting kicks off a series of high-level meetings: it will be followed by the G7 summit in Germany and a NATO summit in Madrid on June 29-30. EU candidate status, a commitment to Ukraine’s reconstruction, and a reassessment of NATO’s capabilities and strategic outlook are building blocks of future European security. They all rest on the premise that the ongoing war will not end on Russia’s terms.

For this premise to hold, Ukraine will need active and coordinated military support in the months to come. EU candidate status and weapon supplies are two sides of the same coin.

Gwendolyn Sasse is a nonresident senior fellow at Carnegie Europe and director of the Centre for East European and International Studies (ZOiS) in Berlin.